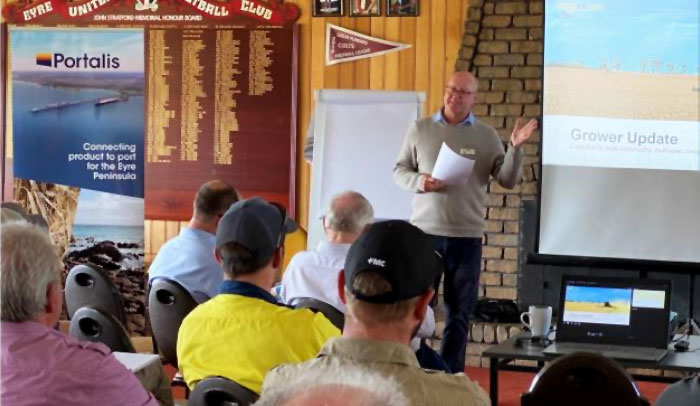 The membership jump follows a series of grower information sessions held by EPCBH over the past three weeks at locations across the Eyre Peninsula including Ungarra, Kimba, Arno Bay, Cummins and Poochera with the number of grower businesses now members of the cooperative at 110 and climbing.

CEO Tim Scholz said the membership growth reflected the overwhelmingly positive response to the opportunity being presented by EPCBH and its partners in the Portalis joint venture, Iron Road and Macquarie Capital.  “We’ve had great feedback and enthusiasm for the project and it’s terrific to see such a significant jump in our membership in just a few weeks,” Tim said.

“There are two key benefits of membership that are really resonating with growers. First, EPCBH members will have substantial long-term equity in the Cape Hardy port through membership of EPCBH.

Secondly, EPCBH members have access to an exclusive foundation member rebate.  Such a strong jump tells us that EP growers want more control of their future.  They understand that this is an opportunity to do just that, but it needs to be grabbed with both hands right now. There’s strength in numbers and that’s driving growers to become EPCBH members.”Portalis Chair Rob Kerin, who addressed the EPCBH grower information sessions, said the grower community had “a once-in-a-generation opportunity”.

“Growers on the EP know the history. Deregulation is an unpleasant memory and Cape Hardy is offering them the chance to take some control”, he said.  “The meaningful long-term equity, the clear pathway to increase that ownership stake, the fee transparency, member rebate and competitive freight costs are all adding up to a very compelling story”.

“Now growers need to strike while the iron is hot. This is a fantastic opportunity and one growers need to grab hold of before they get back to sowing their next crop – and they are, which is great to see.”

For more information about the exclusive benefits for EPCBH members delivered through development of the Cape Hardy port project, growers can call Karen Baines on 0421 677 860, or email to: members@epcbh.com.au.